Brendan Farren is originally from Newtownards, Co. Down, and now lives in Inishowen, Co. Donegal, with partner and 3 children on a small organic farm. He has been a self-employed artist since 1992. Since 2004 he has grown willow and other natural materials on his land, and uses these materials where possible in his sustainable creations.

‘I now have online weaving video tutorials available- check out http://www.biggreenweaving.com and Big Green Weaving on Facebook . There are lots of free videos on Big Green Art on YouTube

Or go direct to Basketweaving in 6 easy steps to see what the online tutorials look like.

This is a wee cabin we finished in the autumn of ’20 in Greencastle, built with and for my cousin Danny. You can see details of the build on the Green Building page

This Heron is now watching over the Fountain allotments, in the shadow of Derry’s Walls

These photos show Park Youth, Derry building an arch made from broken branches collected from the park and screwed together. The result is this magnificent wooden archway.

This is Harry The Hare in his new home in the allotments in The Fountain, Derry/Londonderry. He has a wire sub-frame and is covered with willow rods.

These Fire Beacons were made for NW Carnival’s Halloween celebrations, installed in The Fountain, Derry/Londonderry.

Here’s an amphitheatre we rebuilt in St. Columb’s Park House, Derry. The existing terracing was there for years, and we re-landscaped, made seating, and covered the seats with a roof inspired by reciprocal roofs and teepees! And now is a multi-functional new space!

The Greencastle Yawl has been repainted!

First painted in 1998 by myself and Gearoid O’Hayes, it was badly faded when the owners requested a repaint recently. A Greencastle Yawl is a traditional wooden boat used for fishing all along the north coast of Ireland, as far away as Trondheim in Norway, which lends the boat its other name, a ‘drontheim’.

and their Curlew Conservation Project.

A Stick Tree on Derry’s Walls, soon to be decorated with colourful oak leaves. Part of a Positive Mental Health Exhibition, Sep 17-22nd

Since February of ’19 I have been working in St. Columb’s Park, Derry with teenagers from Park Youth. Our remit was to enhance public experience of the park. We decided to build 2 free library boxes, and house them under a wooden lean-to. The teens got hands-on, designing, cutting, and installing the library space. We also built a lean-to dog shelter. And now an arch of 2 trees.

Every winter, the life of a willow worker comes into its own. Winter is probably the busiest time of the year, as it’s when we cut our year’s harvest, and also when we can plant willow rods into ‘living’ structures.

This Wigloo was made by the gardeneering class of Scoil Eoghain, Moville, in Nov. ’18. It’s almost ethereal

Another living willow structure, this is a fence/hedge, or ‘fedge’, built at end of Nov. ’18, in Quigley’s Point Playgroup, Co. Donegal.

This whale was created by BGA and Zero Waste Derry, and was carried in the Derry Halloween Parade, 2018.

This is a wall piece commissioned by a client for his renovated ancestral home on the foothills of Slieve Sneacht.

Lighthouse View is a local B&B here in Greencastle.

This sign is in Strandhill, Co. Sligo, on a well-established ice-cream shop. Because it is situated right on a wild atlantic beach, the sign needed to be very durable, so the letters are copper-covered marine ply on an oak-board base.

I helped an American weaver called Mo create this beautiful coffin, or ‘vessel’, with an unusual wooden spine, requiring skilled packing to keep in shape

I painted this in the summer of ’17 to cover a supermarket wall off the Main St in Moville.

Here’s a few photos of a community- woven sculpture which was created on the streets of Strabane, Co. Derry on July 18th. The woven pig stands beside Ambrose, a bronze sculpture outside the Alley Theatre, from the imagination of local man Flann O’Brien. 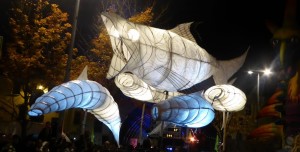 The Salmon of Knowledge was spotted on the streets of Derry, Halloween 2015. (Part of North West Carnival Parade.)

This video was shot at the start of 2014, during the willow-cutting open day I had. The idea of having a ‘meitheal’-style willow harvesting began in early 2013, when a group of friends and strangers came together after we had a traumatic fire at our home the xmas before. And they wanted to do it again last year, hence the video.

This is called ‘Return of the Dagda’ and was painted in Glenties in 1999. It was bought by Donegal County Council, and is hung in Buncrana Library.

I would like to publicly thank Phil ‘Pip’ Murray, my cuz and oldest friend, for keeping this website t’gether over the years! I hope you enjoy looking at my work.

Great news from BGA- I now have an online video tutorial website, and have begun to offer weaving … END_OF_DOCUMENT_TOKEN_TO_BE_REPLACED

I have been offering regular tuition classes in Basket Weaving for some years now. Due to the corona … END_OF_DOCUMENT_TOKEN_TO_BE_REPLACED